The solar panels are located in the area of Turner and Wolf Pit roads. Development Authority Executive Director Tim Martin said that the panels were turned on and began producing 700 kilowatts of electricity to send to the Georgia Power grid on Tuesday morning. Martin said it is part of an initiative by Georgia Power to increase solar power usage. “Georgia Power Company wanted to increase the percentage in their portfolio of all sources of electricity, they wanted more solar,” said Martin. “So they created this advanced solar initiative and we became part of that.”
END_OF_DOCUMENT_TOKEN_TO_BE_REPLACED

“It could take many, many years, but we will get there,” says Lee Peterson, senior manager for Reznick Group’s national tax practice in its Atlanta office, where he has served as an advisor in renewable energy projects across the U.S. valued at more than $2.4 billion – but only a tiny portion in Georgia. END_OF_DOCUMENT_TOKEN_TO_BE_REPLACED

United Renewable Energy Designed, procured, and provided construction management services and ongoing support and maintenence for this Utility scale solar PV project. The customer is a Fortune 500 electric Utility. The installation is located at a high voltage electrical substation. Each set is tilted at 40 degrees due south.

END_OF_DOCUMENT_TOKEN_TO_BE_REPLACED

Always looking for new opportunities to connect students to sustainable jobs, Lanier Technical College has set its sights on the solar industry.

Demand for solar energy has grown about 30 percent per year during the last 15 years, according to Solarbuzz, which tracks the industry worldwide as part of the marketing research firm, NPD Group. Solar photovoltaic (PV) installations increased by 7.3 gigawatts in 2009; up from 6,080 megawatts in 2008. (A megawatt is 1,000,000 watts; a gigawatt is 1,000 megawatts.)

The firm projects strong industry growth in the Asian Pacific, European and U.S. markets for the next five years. More efficient and less-costly technology has made solar options more affordable at the same time the world has increased its demand for renewable energy sources. END_OF_DOCUMENT_TOKEN_TO_BE_REPLACED

William Silva and Lanier Tech Team up for Another NABCEP Course 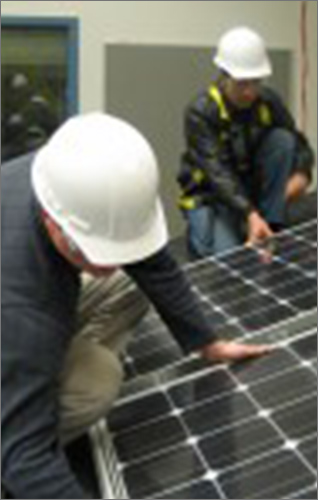 In the last fifty years, technology has transformed the world. It has enabled us to live longer, instantaneously communicate with each other across the planet and explore the tiniest bits of our world and the furthest regions of our solar system. We are only now beginning to recognize that this dizzying speed of technological advancement – resulting in exponential population growth and an insatiable appetite for energy – has impacted the natural world. In response to this recognition, markets have created a demand for technological innovation to reduce culture’s impact on the natural world. The Gwinnett Environmental & Heritage Center will usher in the new year with “The Technology of Sustainable Design”, an exhibition about new developments in sustainable design that features the work of Atlanta-based firm Houser Walker Architecture, Timmons Design Engineers, United Renewable Energy and Suniva, a world leader in solar cells. The exhibition will run from January 9 to February 27.
END_OF_DOCUMENT_TOKEN_TO_BE_REPLACED