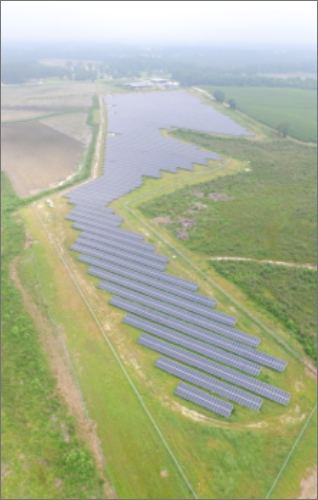 Elizabethtown, NC, December 5, 2016– United Renewable Energy LLC and Cypress Creek Renewables are pleased to announce the completion of a 7 MW solar photovoltaic facility located in Bladen County, NC. The project was completed in a partnership between United Renewable Energy LLC, which completed the development activities, and Cypress Creek Renewables who acquired and constructed the facility in late 2015.

The 7 MW facility provides solar energy to Duke Energy Progress through a Power Purchase Agreement and is located on approximately 30 acres of land. This is one of the first solar projects constructed in Bladen County, NC, but many more have recently been announced. Solar projects offer competitive lease rates for landowners, benefit the local property tax base, and provide local jobs to assist with the construction and operation of facilities.

“We are proud to work on this exciting project with Cypress Creek Renewables, one of the largest and fastest growing independent power producers in the world. Their focus and strict adherence to high quality standards are an excellent fit for our developed projects. ” said Keith Herbs, Executive Vice President of United Renewable Energy LLC.

“The 7MW Bladen County project completed with United Renewable Energy was very well developed and is the first of many solar project investments in Bladen County, NC that Cypress Creek is planning.” said David Bunge, Vice President of Development for Cypress Creek Renewables. “It is also our first project complete with United Renewable Energy LLC. Based on the excellent results, we look forward to working together on many future projects.”

About Cypress Creek Renewables
Cypress Creek Renewables is the American leader in Local Solar. Cypress uses a data-driven approach to identify and acquire underutilized land on which it builds solar farms ranging from 2 – 20 MW on average, and it currently owns the largest solar farm east of the Mississippi River. Cypress sells the renewable energy these solar farms create back to local communities, typically at rates lower than fossil fuels. This process guarantees widespread, affordable access to clean energy.

Cypress is fully integrated, it finances, builds and operates its utility-scale solar farms with the support of over 200 team members and it has invested over $1.5 billion into solar farms since 2014. Cypress’s philosophy is that the solar farm process only works if it is a “win” for everyone, promoting partnerships with landowners, local communities, regulators, lenders and consumers (utilities, businesses and individuals) to maximize green energy usage as well as create local jobs and community development.